Starting with the 1991 Census, CMHC began deriving core housing need estimates from census data with the help of Statistics Canada. Since then, CMHC has published estimates regularly in a range of products.

Statistics Canada conducts the Census every five years. In 2011, the voluntary National Household Survey (NHS) replaced the former mandatory long census questionnaire from which housing content was obtained. Statistics Canada has cautioned that because of the change from a mandatory to a voluntary survey, data from the NHS may not be strictly comparable to those from earlier censuses.

For more information on the Census and NHS, visit www.statcan.gc.ca.

A household is in core housing need if its housing does not meet one or more of the adequacy, suitability or affordability standards and it would have to spend 30% or more of its before-tax income to access acceptable local housing.

Acceptable housing is adequate in condition, suitable in size, and affordable.

Assessing whether a household is in core housing need thus involves two steps:

Only private, non-farm, non-band, non-reserve households with incomes greater than zero and shelter-cost-to-income ratios (STIRs) less than 100% are assessed for core housing need. Farms are excluded because shelter costs for farm households are not separable from costs related to other farm structures. Band households are excluded because shelter costs are not collected for households whose housing costs are paid through band housing arrangements. For the purpose of measuring affordability, CMHC regards STIRs of 100% or more, STIRs for households with incomes of zero or less, and STIRs of households living in non-band housing on reserves1 as uninterpretable.

1Given communal land tenure in most reserve communities, the distinction among different tenures as reported on-reserve may be less clear than off-reserve. 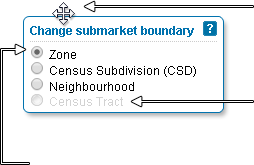